The club enjoyed the company of 26 members at the start of the year. While we were delighted to have Lis Newnham and Barrie and Sandie Hunter join the Club during the year, it was with much sadness we farewelled our esteemed member Rotarian Arthur (Pod) Francis on 29th November 2020.

Although it was the year of COVID-19, with many social distancing restrictions, we were fortunate to be able to meet - with a reduced number of persons present and none of our regular guests - to celebrate the achievements of the Club under the guidance of President Paul Miegel. DG Brian Peters awarded a sapphire Paul Harris Fellow to PP Meredith Miegel for her work on the District Youth Exchange Committee and for her achievements with the Wetlands project. Outgoing AG Richard Lovett and incoming AG David Barrat were present and were able to wish incoming President Norm O'Flaherty well in 2020-2021.

Members of the Club taken at Changeover

Lis was inducted into the Rotary Club of Corowa in a ceremony conducted by President Norm O'Flaherty.

Arthur, also known as 'Pod', was born in Rutherglen on Oct 23rd 1927, son of Arthur John and Elizabeth Marion Francis. He was the 5th child for Arthur and Elizabeth, with older siblings, John (Jack), Raymond (Mick), Joan and Kathleen and younger brother Leonard (Hec).

He attended St Mary's primary school in Rutherglen and completed his matriculation at Assumption College, Kilmore. He went on to spend 3yrs at Melbourne University before returning to Rutherglen to join the family transport business with his father, & brothers Jack & Hec.

Arthur married Lesley Margaret Campbell on 4th June 1956 at St Mary's Catholic Church in Rutherglen and they went on to have 5 children: Mark, David (dec), Raymond, Andrew and Jane.

As the business and his family grew, Arthur spent more time at home and became an active member of the Rutherglen and Corowa communities. He was a member of the Corowa Rotary CIub for 44 years, including 2 years as President, and was awarded the Sapphire PauI Harris Fellow for his contributions to the local community,

Rotary's international community work and his commitment to the Rotary motto of "Service above Self".

Arthur was also a founding member of the Rutherglen Wine and Food Club and maintained his membership for over 50 years. Sport was another of Arthur's interests, in particular golf, football, and horse racing. The Corowa Golf Course was the place to find him on a Saturday afternoon!

He was a very private and humble man, he gave generously, was loyal and dedicated, admired and respected by

many. He wiII be greatly missed.

The members of the Rotary Club of Corowa express their deepest condolences to Lesley and family on the sad passing of Arthur (Pod) Francis, Arthur held many portfolios including President(1982/83) during his 44 years as a member of the Corowa Rotary Club. Arthur was a Sapphire Paul Harris Fellow.

Arthur will be sadly miss by all.

The 41st annual Federation Festival weekend has been hailed a success evidenced by the smiles on the faces of those who attended.

According to Federation Festival Director Gary Poidevin, Friday night's Federation Dinner with guest speaker Dr Brendan Nelson was a hit, followed by "spectacular" fireworks on Saturday and a "fantastic" parade down Sanger Street on Sunday.

"It was a very successful Federation Festival weekend, organised by the Rotary Club of Corowa. People who attended the dinner, the fireworks and the parade all said they had a wonderful time,"  Mr Poidevin told The Free Press.

Despite the soaring temperatures over the weekend, hundreds of locals gathered on Sunday to watch the floats and pipe bands come down Sanger Street. It was a year like no other with COVID-19 check-in stations and sanitiser available to the public. "Considering the heat and the COVID restrictions, we are pretty pleased with the turnout," Mr Poidevin said.

A total of 19 floats paraded down Sanger Street to Bangarang Park, including emergency service vehicles, mini coopers and vintage tractors. After a year of limited performance opportunities, five pipe bands including The Scots School Albury Pipe Band embraced the opportunity to perform for the community.

Corowa Public School were awarded "Best School Float" while Corowa Federation Museum were crowned "Most Humerous Float". Corowa Public School really put some flavour into the parade. Their float was remarkable, and the school did a fantastic job putting it together," Mr Poidevin said.

Following the parade, locals were able to cool down and enjoy the Rotary Club's Federation Markets in Bangarang Park with plenty of local produce and unique creations.

Despite only three weeks notice, Mr Poidevin praised everyone who made the effort to attend and contribute to the weekend's festivities. "Organisers were diappointed they couldn't announce the festival sooner. However they were very pleased with the attendance numbers over the weekend," he said. "Well done to all the participants and the Rotary Club of Corowa for continuing to organise this long-standing tradition."

Dr Brendan Nelson’s dynamic, powerful, emotional and heartwarming address was admired by all at the sixth annual Tim Fischer Oration Federation Dinner on Friday January 22 to start off the big Federation Festival.

It was a 30-minute journey about people and events which have shaped Dr Nelson’s life, with a focus on character and education.

Conducted by the Rotary Club of Corowa and held at the Corowa Civic Bowls Club, there was an air of excitement at the Federation Dinner and a continuous buzz the moment each of the 93 attendees entered the club’s function area.

Attendees were excited to see their friends and colleagues, and tickets always sell fast. But not as fast for the 2021 dinner, because Dr Nelson AO was the guest speaker.

Ticket holders were looking forward to hearing from the much learned, much travelled, much achieved and highly decorated man. And he didn’t disappoint. At the end of his talk, diners were amazed, gave a huge round of applause and were almost speechless.

…  Dr Nelson was made Federal Minister for Education, Science and Technology in 2001.

…  “Education is the defense of the nation. Listening to people and new ideas, having an open mind, and displaying courage both mentally and physically, sacrifice and mateship form the character of the people I’ve admired”

…  At the turn of this century, Dr Nelson was the person who saved the Mulwala explosive Factory from closure. … A new factory has since been built and now has 380 employees.

…  Dr Nelson studied at Flinders University SA where he graduated with a Bachelor of Medicine and Surgery. From 1993 to 1995 he was National President of the AMA and campaigned on a wide range of social policy issues, including Aboriginal health and immunization.

…  In 2006 he became Minister for Defense when troops were deployed to Iraq, Afghanistan, East Timor and the Solomon Islands.

…  In November 2007 Dr Nelson was elected leader of the Liberal Party of Australia, serving as the Leader of the Opposition until September 2008. The following year he retired from federal politics before taking up his ambassadorial appointment to Belgium, Luxembourg, the European Union and NATO (2009-12).

…  Dr Nelson was Director of the Australian War Memorial from 2012 to 2019 and gave wonderful insight into his role,

…  Tim Fischer AC was regularly referred to by Dr Nelson, who said that Time embodied all the characteristics required to be a champion Australian.

…  This was an amazing night with 62-year-old Dr Nelson AO – now chairman of Boeing Australia, New Zealand and South Pacific – who said it was an honour to speak at the Federation Dinner.

Sponsor Robyn Rhodes brought Sandie and Barrie forward to present them to the Club. After President Norm O'Flaherty had read the relevant protocols, he gave Barrie and Sandie  their Rotary Induction Certificates, together with their Rotary lapel pins, dinner badges, visiting badges and new member packs.

The Club was thrilled to be able to welcome two new members into Rotary.

100 years of Rotary In Australia.

For a fortnight the Club was able to show various aspects of our Club's activities and interests in a display in the foyer of the Federation Shire Offices.

As well as an emphasis on our participation in the District Youth Exchange program, there were momentos of various District Conferences and International Conventions which members had attended. There were also a cycling top from Ride to Conference, a high viz work vest for Club working bees and a selection of some of the many banners received / exchanged from Clubs around the world. Historical documents and photos complemented the whole eye-catching display.

Many thanks must go to the Shire Council for allowing our display to be in the foyer. 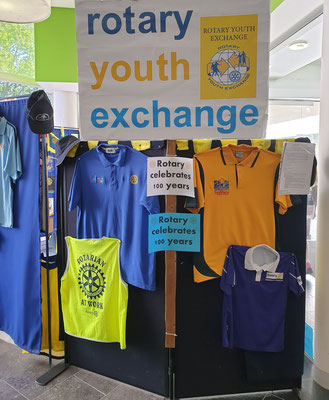 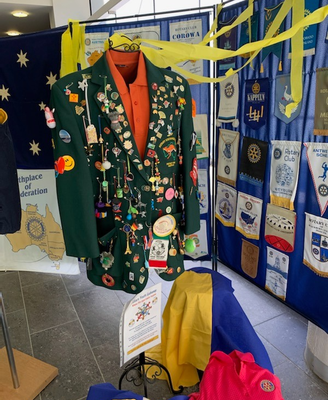 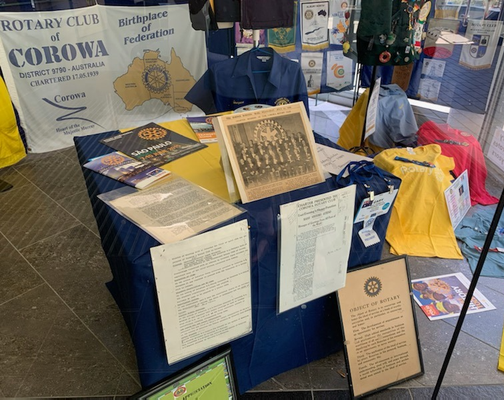 Thank you to Federation Council and their Community Grants! The Rotary Club, with Federation Council’s assistance, has installed a Water Filling station at the Whitehead Street Wetland. A bubbler, water bottle filler and place for our four legged friends to get a drink too. Also not far off the bike track. Enjoy!